“What do I remember about that long day way back in 2010? I remember being tired – tired and disappointed.” Briton John Toomey, the co-founder of Yu! Fruit Snacks, can laugh about it today, because he knows his quest for a professional packaging company ended successfully: “We wouldn’t have a business if it weren’t for Vetipak.”

John had created a healthy new snack and was looking to market it: “These are small snacks for children, made from 100% fruit: a healthy addition to kids’ lunchboxes. We wanted to package our fruit snacks in portions: five small bags that fit into a larger bag, one for every school day of the week. One of our contacts assured us that we’d be able to find our packaging partner in the Netherlands, so we set out to find that partner.”

The British delegation visited a number of contract packagers, but none of them fit the bill. “They’d either lack the capabilities and/or facilities we needed, or they didn’t have the passion we were looking for,” according to John, who reckons that his company’s status – or rather, the lack thereof – didn’t exactly help things either. “We were a start-up back then and hadn’t established any kind of track record yet. By four in the afternoon that day, after several major disappointments, we were just about to give up when our contact suggested another option: a company based in Oss called Vetipak. We didn’t have an appointment. We simply called and, fortunately, they were willing to hear what we had to say.” 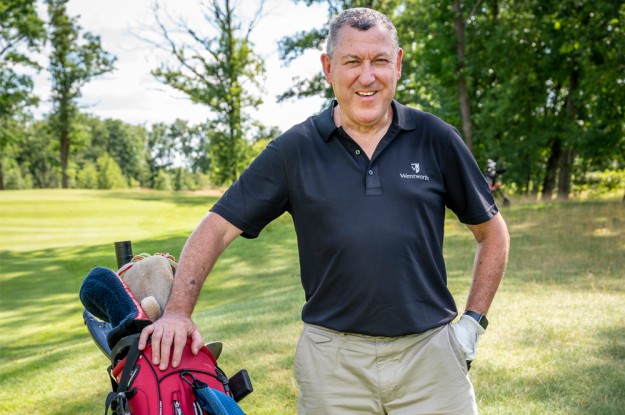 John remembers that first meeting as though it was yesterday: “We were ushered into an office, where we were welcomed by a tall, charismatic man with dark hair. I can still hear him say: ‘Hello, I’m Arno, and my English is not so good.’ I also remember his answer to our question: ‘No problem – that’s what we do. We can do it.’ He spoke those words with such a sense of calm and such confidence... That’s when I knew that we’d found our guy. I was certain he was going to make it happen for us.”

And, sure enough, Arno van de Ven did not disappoint: he put John in touch with Sales Director Mark van de Burgt, who was in charge of price negotiations and other key terms. John, laughing: “I’d say Mark is anything but a softie. He’s a tough guy, but always fair-minded. Also, he promised us what we needed, and from then on it was all systems go.” Not long after Vetipak received the first bulk shipments of fruit snacks from Britain, the products were available from all major supermarket chains across the UK.

John: “Tesco, ASDA, Sainsbury… our Yu! fruit snacks were available everywhere, and they soon became hugely popular. We generated revenue of 5 million euros in our very first year in operation, and we have Vetipak to credit for that. In fact, we wouldn’t even have a business if it weren’t for Vetipak.” Business was going so well that in late 2010, John and his partner received an offer from a private-equity fund and decided to sell their company.

“Vetipak is a wonderful success

story that is still being written”

Even though the professional relationship between John and Vetipak was relatively short-lived, he and Arno remain close friends to this day. John: “I’m proud to say that Arno is one of my best friends. We still see quite a bit of each other, including on the golf course: we play together several times a year at the Wentworth Golf Club, in Surrey, on the outskirts of South London. Arno even joined the club as an overseas member. So who, of the two of us, is the better player? That would be me, of course, although Arno would probably say it’s 50-50!”

John still talks about Vetipak with a lot of respect: “They have every reason to be proud of what they’ve accomplished. Even just the way they keep innovating alone, through technologies such as automation and robotization... they really make the impossible possible. And yet the company’s culture is all about its people. Their entire organization exudes professionalism, passion, and a strong drive to be the best. “Vetipak is a wonderful success story that is still being written.”

Curious about the other stories from this anniversary series? >

Commitment to corporate social responsibility is strong at Vetipak. We are therefore pleased that both SEDEX and EcoVadis give our policy a positive rating. Our QESH Manager Monique Donkers comments on this achievement.

Newspaper reports about our new location

You’ve probably already heard about our new location at the Vorstengrafdonk industrial estate. As a company, we’re particularly proud of this milestone, especially given this dynamic period and the rapidly changing economy. So we’re pleased to share our news with the rest of the world!

“Move to Veghel was the right choice”

Desiree van Daalen about her experiences with the company.