Ynno pulls it off: youngest ever plant manager!

Ynno van Erp has never been coy about his ambitions: he previously shared them with us in our The Drive Of… column on our website, and in the early years of his career he expressed the desire to become the youngest plant manager in Vetipak’s history. And at just 27, he’s already making it happen. After working his way up the ranks in several other challenging roles, he recently took over management of our Oss plant.

The brand-new plant manager started out as a trainee around five years ago, before being promoted to project manager, gaining essential knowledge and experience in quality assurance, and then moving into the big time as a production manager at our Zeewolde site. And now he’s hit yet another milestone: a position in which he heads up a team twice the size as in his previous role and where he’s responsible for even more different areas than before.

Ynno is pleased with the opportunities he’s been given – and sooner than expected, too, as the initial plan was for him to remain at the Flevoland site for another while. Ynno: “I’d been interested in this position for many years, as I always felt it would allow me to develop my full potential. And I also happen to be drawn to these types of all-rounder roles.”

A few months into this job, Ynno has found that no day is ever the same. “I’m constantly delving into new and exciting areas. I might be having a very straightforward, nuts-and-bolts conversation in the production plant in the morning, only to attend a meeting with the Management Team to discuss the annual strategic plan in the afternoon.” 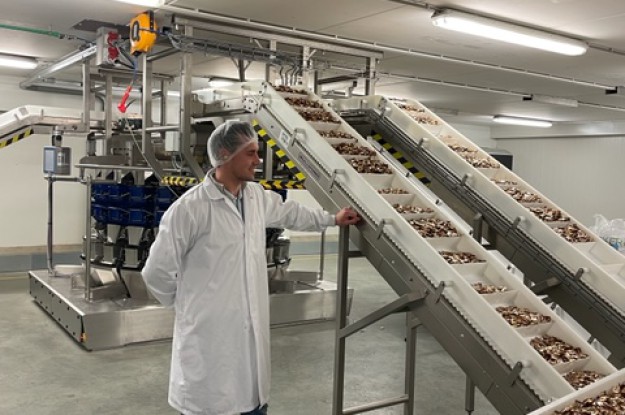 I hope I can energize my
team members with my enthusiasm

Ynno learned a lot during his almost one-year tenure as a production manager at the Zeewolde site, which has served him well in his current role as plant manager. “One of the main things I learned is that the production plant is really where it all happens. If I get a chance, I like to put on a white coat every day just so I can learn what’s going on, as well as to help make improvements.”

“Here’s a simple example”, he continues. “We recently decided to make some modifications to a label machine and start using it for another production line. We then implemented this together with all the other departments, as a team. And we did it in record time, getting the job done in just a few weeks. It’s just one of the many things that make this job so fulfilling.”

So it’s ‘ making the difference together’ that puts a smile on Ynno’s face – an attitude he feels is vital to growth: “Growth is really the magic word at the Oss site and it’s what we aspire to, but we can only achieve that if we have a strong team, with employees who have each other’s backs no matter what. So that’s my priority in this job, and I hope I can energize my team members with my enthusiasm, so our plant can keep improving. I’m happy to say that the feedback I’ve received so far has been positive, which only increases my drive for success!”