“You need to be incredibly pigheaded to be a successful innovator”

“Isn’t it a sight to behold? Our equipment supplier told us it couldn’t be done, but you usually only need to say that once around here – then someone will get their brains in gear and start creating designs until it can be done. And you can see the fruits of our labor right here.”

Cees van der Ven is visibly pleased when he points at a packaging machine manufactured by a globally renowned supplier. Or, to put it more accurately: two machines, as Cees spent ages working out how he might be able to combine the two units. The upshot is that we have been able to double our production speed in this area. It’s just one of the many examples of innovativeness – and perseverance – Cees shows us during our tour of one of the Vetipak sites. 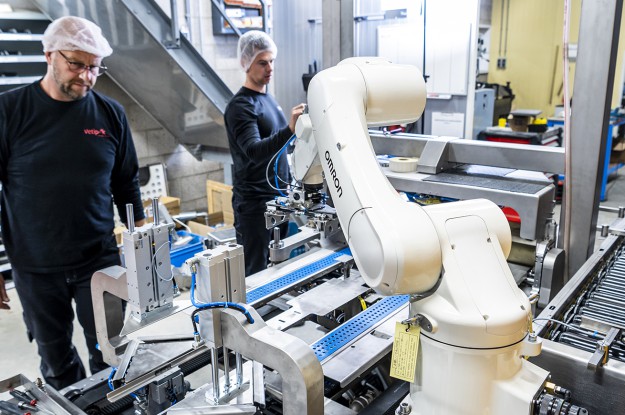 It turns out things could in fact be speeded up: by a whopping
35 percent, to be precise

Because there’s more to being innovative than just smarts and resourcefulness – you also need to be ‘incredibly pigheaded’, as the project manager puts it. And, luckily for us, pigheadedness is a quality Cees happens to have in spades. In fact, he shares this quality with Vetipak founder Arno van de Ven. Together, the two men keep the wheels of innovation at our company turning, having proved dozens of times that something people thought couldn’t be done was, in fact, possible after all.

It all started with a bet...

“Arno and I are always challenging each other. It all started with a bet we made when I’d recently joined the company. We had acquired a machine used to glue together boxes for a well-known chocolate brand. I felt we could speed up the process, but when I said that to Arno, he told me he didn’t believe it. And I couldn’t really blame him, as that machine had cost hundreds of thousands of euros...” 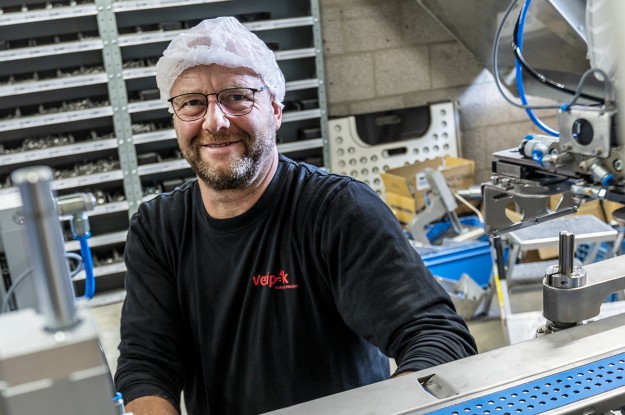 “They weren’t expecting that
from that contract packager from the Netherlands...”

But Cees starting fiddling around with the machine – even going so far as to take it completely apart – and found that the process could be speeded up: by an impressing 35 percent, no less. Yet Cees still wasn’t satisfied at this point, and he also knew the next step in the process would require closer analysis and a more effective action plan. “It’s best to get the design right from the very start rather than breaking out the grinder and smoothing out the sharp edges later on.” And so he sat down at the drawing board and started sketching a plan...

This marked Vetipak’s first attempt to develop our own machines, which means we had to start analyzing both the mechanics and the operation of our equipment. We started out by teaming up with a third party, but soon decided to hire our first in-house developer. This decision paid off, as well as garnering Vetipak respect across the industry – although we were still viewed by some for a while as a bunch of “IT cowboys.”

Cees, reminiscing: “Our COO Mark van der Burgt and I once attended a convention abroad, and when he finished his presentation on automation and robotization, the whole room fell silent. They weren’t expecting that from that contract packager from the Netherlands...”

He continues: “And at the offices of a major technology company, we once had a couple of ‘suits’, so to speak, make fun of us. We wanted to use a robot cell to pick up transparent boxes using vision technology, and they told us that was impossible. Well, it turned out they were wrong.” The triumphant look in Cees’ eyes speaks volumes: this is clearly a man talking about his passion.

Cees confesses he kind of likes being referred to as a ‘cowboy’. “You know what? If you want to be ahead of the pack, you need to be unafraid to take risk, stick your neck out, and explore new avenues others aren’t exploring or are afraid to pursue. People tend to be a little taken aback – even right here in the company – when we get all gung-ho like that, and even Arno and I need to tell each other to slow down occasionally. But if you don’t think in terms of opportunities, it’s never going to happen, so we’re quite happy in our role as trailblazers.” 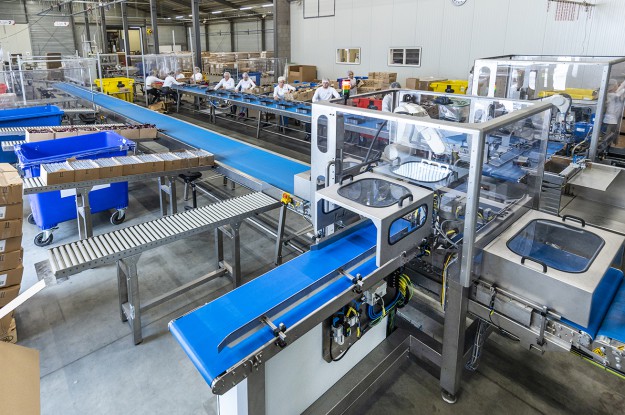 However, as Cees explains, there’s always a healthy dose of vision involved. “We like to call it the ‘beer mat stage’, as we tend to take a pretty levelheaded approach to the whole process. That said, we do spend a lot of time on the conceptual part: thinking up and developing designs, discussing literally everything we do, developing the business case, and so on... And the best part is the actual manufacturing process, which we may outsource or do in-house, depending on the case.

Vetipak currently uses around twenty robots altogether, while Cees and his team continue to develop the latest techniques at the company every day. Vision, artificial intelligence, collaborating robots: Vetipak has been right on top of all technological advances and even created a department dedicated exclusively to automation and robotization:LAB 51. Cees: “We use a roadmap to support us in the strategic development of flexible, multi-purpose robots with switch tools, which is going to be a game-changer in our industry.”

At the end of our tour, we arrive at a brand-new machine. Although Cees is in doubt for a moment, his pride wins out in the end over the urge to keep this robot top secret for now. He shows the packaging: “Do you see those folds right there? Do you have any idea of the complexity of that technique? Nobody can do this, but we can: and we’ll be manufacturing millions of these boxes with this new robot over the next several years. Pretty spectacular, don’t you think?” As before, the sparkle in his eyes says it all...