Newspaper reports about our new location

You’ve probably already heard about our new location at the Vorstengrafdonk industrial estate. As a company, we’re particularly proud of this milestone, especially given this dynamic period and the rapidly changing economy. So we’re pleased to share our news with the rest of the world! 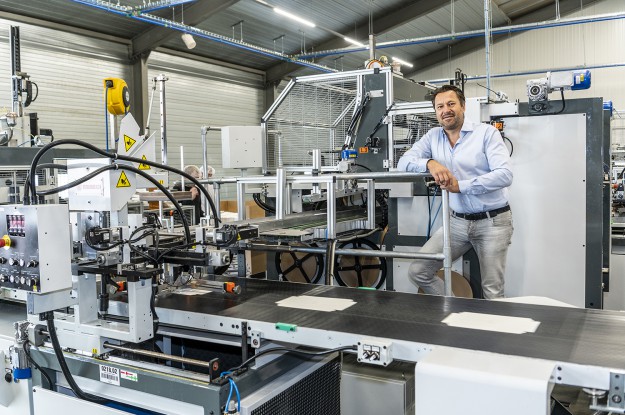 And it’s even better when another objective party does so, such as the Brabants Dagblad. This daily newspaper recently wrote a great article about us.

In the article (which you can read below), our COO Mark van der Burgt tells the story behind our new location, which we opened especially for our activities on behalf of Rituals. In his interview with journalist Wouter ter Haar, he also explains why we’re seriously considering opening an eleventh location. In short: we’re taking a moment to appreciate this great milestone, partly thanks to the wonderful news article, and we’re looking ahead once more.

“We’re in the Champions League when it comes to packaging”

Gift sets, luxury gifts and calendars: Vetipak in Oss is packaging these in ever-increasing quantities for Rituals. And the company is packaging much more these days, which is why it’s already considering an eleventh location.

Vetipak is already talking about the ‘youngest division’. The Oss-based business is firmly convinced that the packaging and repackaging of all kinds of personal care products is a growing concern. Vetipak has recently opened a new factory more or less especially for its ten-year contract with Rituals. The former Heineken premises are now being used to package numerous products by the top Dutch personal care brand for shipment all over the world.

Out into the world

Personal care products are also processed at the Landweerstraat location in Oss, but there was no longer room for expansion there. Reason enough for this latest expansion, especially given Vetipak’s strong growth.

Commercial director Mark van der Burgt: “In this new location – our tenth – we can receive, process and prepare the products for sending out into the world.” Van der Burgt: “We estimate that we will need to recruit about another hundred people for this location.”

“We estimate that we will need to recruit

about another hundred people for this location.”
- Mark van der Burgt

The company hopes to achieve this by mid-June, bringing the total number of employees to well over 700. Vetipak currently employs around 650 people, who together achieve a turnover of almost fifty million euros. The Oss-based company has accomplished this in just 25 years. A little more than a decade ago, Vetipak (established in 1997 by Arno van der Ven and Hans Timmers) achieved about half of this revenue with ‘only’ two production locations.

With the addition of the second Vorstengrafdonk location in Oss – the company’s headquarters is situated on Menhirweg – Vetipak now has more than ten locations, each with its own focus. For example, the Veghel location mainly packages products for a well-known global chocolate manufacturer, the name of which Van der Burgt is not at liberty to reveal.

The location in Breda focuses on packaging and repackaging consumer electronics. In Ede, Kraft Heinz sauces, breakfast cereals and flavored syrups undergo various logistical processes before being prepared for dispatch to supermarkets throughout the Benelux region. The location in Veghel also ‘processes’ various animal feeds.

According to Van der Burgt, the commissioning of the new location aligns perfectly with Vetipak’s ambitious plans for growth. “We want all of our divisions to grow in the coming years.” The company believes that the greatest potential for this growth is in the areas of food, animal feed, consumer electronics, personal care items, and confectionery, in which Vetipak more or less got its start.

Van der Burgt: “If we do say so ourselves, we’re particularly good at packaging a wide range of products to high quality standards. And we’re expanding these activities considerably, also by means of far-reaching partnerships, acquisitions and accessing new segments.”

“We’re proud of what we’ve

achieved in the past 25 years”
- Mark van der Burgt

Meanwhile, Vetipak is already thinking further ahead. Cautious consideration is being given to building a new factory, probably at the new Heesch-West industrial estate, a few miles from Vetipak headquarters in Oss. “We want to stay in the Oss region for our personal care division, because that’s where most of our people come from. That’s important because they are already experienced in working on our complex production lines.”

However, the growth must actually be realized before the new factory is built. “But because we’re now growing so rapidly each year, there’s a good chance that we’ll return partially to where we had our origins.”

According to Van der Burgt, the originally Heesch-based Vetipak has expanded to become a major European player in the co-packing sector, which comprises the packaging and repackaging of all kinds of products. “Since 1997, we have grown from a small local packaging company to become one of the largest co-packers in Europe. We’ve become a leading player with whom all kinds of European manufacturers and numerous top brands would like to work. You could say we’re in the Champions League. At the same time, we’ve remained a family business – the second Van der Ven generation is a shareholder – and we’re all proud of what we’ve achieved over the past 25 years.”

If you’re interested in reading the original article, you can find the PDF here.

“Combination of hard work and chatter”

2 January 2019 Nathalie Joosten reports to the counter at Vetipak, about to begin her first day of work. The only problem is, the colleague who was going to show her the ropes is on vacation.

Anyone who has worked with Vetipak for some time is probably familiar with our credo: “Involve us as early as possible in your product’s development, because that's when we can provide the most effective help.” We’re now seeing this is happening more and more often, and with excellent results. Time for a two-parter. This time, we’re speaking with Mark van der Burgt, our CCO, and next time with Nestlé’s Julie Navarro.

A day in the life of... operator Tomasz Telega

His career at Vetipak started ten years ago with a position as a packaging worker. But as driven as he is, it didn’t take long for Tomasz Telega to make progress: he completed his operator training and took up the position that he still enjoys to this day. “The technical aspects, working for top brands and with great colleagues... this is a wonderful, varied job,” says Tomasz. He’s taking us along with him on a typical day at work.