Vision for robotisation “This is going to have such an impact...”

Beware: this shouldn’t be a story that frightens people, warns Arno van de Ven at the start of the interview. The founder of Vetipak absolutely does not believe that robots will take all of our jobs. That said however, it’s also absolutely clear to him that robotisation is going to have a major impact on the packaging industry and the supply chain. Starting with Vetipak.

We’re already halfway through the interview when a huge smile lights up Arno’s previously serious face. For the umpteenth time that morning, he takes out his smartphone and scrolls through the dozens of videos.

“I’m dyslexic, I do everything with videos,” he grins. Then he points and says: “Look, here’s what’s happening now. This is going to have such an impact...”

When the interviewer looks at him a little blankly, Arno explains what we’re seeing: two robot arms working together. After a brainstorm day at Delft University of Technology, a group of scientists had told him that this was absolutely not possible. But at the end of the session, the quietest of the group had approached him. “Arno, I’ve been thinking... I think it actually is possible.”

“Those are the best moments,” says Arno. “When everyone things something’s not possible, and then someone stands up and says: ‘It is possible’. So we started working on it.” 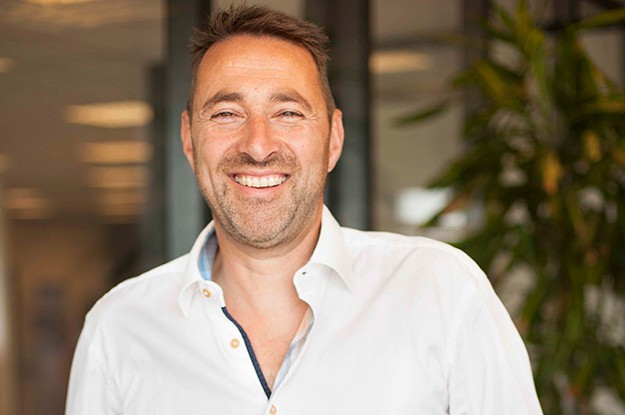 “The way our society is currently set up...

we won’t be able to keep

that up for much longer”

It’s clear: Arno van de Ven is extremely passionate about robots. Around six years ago, he managed to win over his fellow shareholders too, and Vetipak purchased its first robot. It was a very simple one that picked up boxes and put them away. “We’d earned back the purchase price within two and a half years.”

Since then, Vetipak has continued to purchase a few each year, and they now have almost twenty in total. But that’s not the end of the story, according to the born entrepreneur: “This is just the first step in a fascinating process. And we do have to get on with it, because the way our society is currently set up... we won’t be able to keep that up for much longer.”

Mass production has to change

What will the world look like in about twenty years’ time, the interviewer want to know. Images loom in his mind of a packaging factory where robots do all the work and people just control the robots. But what does that have to do with a world that’s consuming itself?

“It’s simple: we have to put a stop to that,” is Arno’s reply. “I think we all agree that we’re currently not going about mass production the right way. All those transport movements, all that energy consumption... If you stop to think about the journey that all the individual parts of an end product make, worldwide, it’s completely crazy. The only alternative, and it simply has to go this way within the next ten or twenty years, is for production to be carried out much closer to the consumer.”

How exactly? “Of course, I don’t know exactly how that’s going to happen either,” says the sober side of the entrepreneur. However, after a little prodding he outlines a potential scenario. 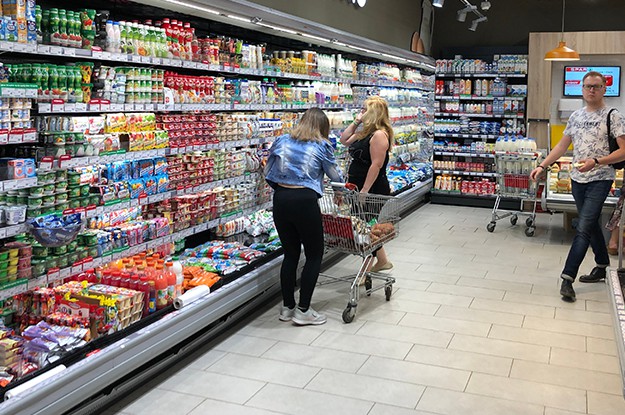 “Which party in the supply chain

is closest to the consumer?

The supermarket as packager

“Which party in the supply chain is closest to the consumer? Correct, the supermarket. So, part of the packaging process could potentially take place there. Just imagine: large supermarkets on the city outskirts, where producers deliver their goods in bulk. The supermarket then tailors the products for distribution: spraying, mixing, packaging... Perhaps on an individual level.”

And perhaps the supply chain will undergo even more radical changes. “Why couldn’t communities tackle this together? For example, people living locally to each other. A little like the way allotments work, but high-tech. Think of the benefits: fewer logistical movements, less energy consumption, smaller batches, tailored to meet the end user’s needs, less waste...”

A development like this looks perfectly logical on paper, but the interviewer asks, how is the ‘ordinary packager’ meant to respond to this? Once again, Arno can’t suppress a broad grin. “Well, we’re long past the stage of being ordinary packagers now,” he says, without a skerrick of self-satisfaction. “We’re already fully committed to this kind of development, and for good reason.”

And then the conversation really takes off. Arno talks rapidly and enthusiastically about the many tasks that ‘his’ robots are now capable of, about the further developments that Vetipak is working on, about his son Nick, who together with Team Rembrandts has become world champion in robotics, about why robots are better than cobots ("Safety!"), about vision, about artificial intelligence....

And all of a sudden, it doesn’t seem strange at all to think that Vetipak will look very different in twenty years’ time. “Perhaps we’ll be carrying out packaging at another place in the supply chain soon; at that supermarket or in that community, for example. That’ll make us the supplier of both the technology and the services associated with it,” says Arno. “It sounds strange to say that now, but it is one of the scenarios that we should consider.”

“But once again,” he insists, “That’s not a frightening scenario. It’ll proceed step by step at a pace that suits the market. But everyone working with Vetipak will notice that we’re at the forefront of these developments, and that we’ll accelerate if we can serve the market by doing so.” 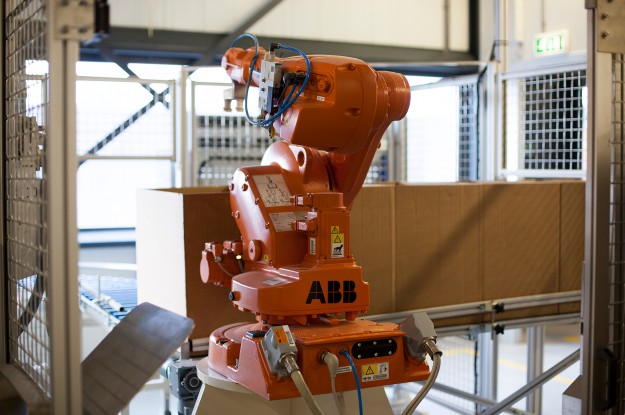 “Everyone working with Vetipak will notice that

we’re at the forefront of these developments”

Not a goal in itself

For now, Arno aims to use robotisation to optimise current production processes. A new generation of robots will be arriving at Vetipak this year for this purpose. “This will allow us to maintain much lower entry costs for much smaller runs,” says Arno. And the long-term plans? “I’m certainly not ruling out the idea of a hall full of cooperating robots in the long term.”

But what about the costs? “We’re considering that too,” he says firmly. “My goal is to have a basic robot which we can use for a range of functionalities. So the robot could be used for filling at one moment, and then packaging at another. If we have a number of these robots, then we’ll be able to limit the investment required, and of course, we’ll also be extremely flexible.”

But, as Arno states at the end of the interview, robotisation is not an end in itself. “The goal is to provide the best possible service to our customers, both qualitatively and quantitatively. So don’t expect any earth-shattering changes in the short term. But when the time’s ripe, we’ll be ready too!”